Should I learn Rust or Solidity to develop smart contracts? 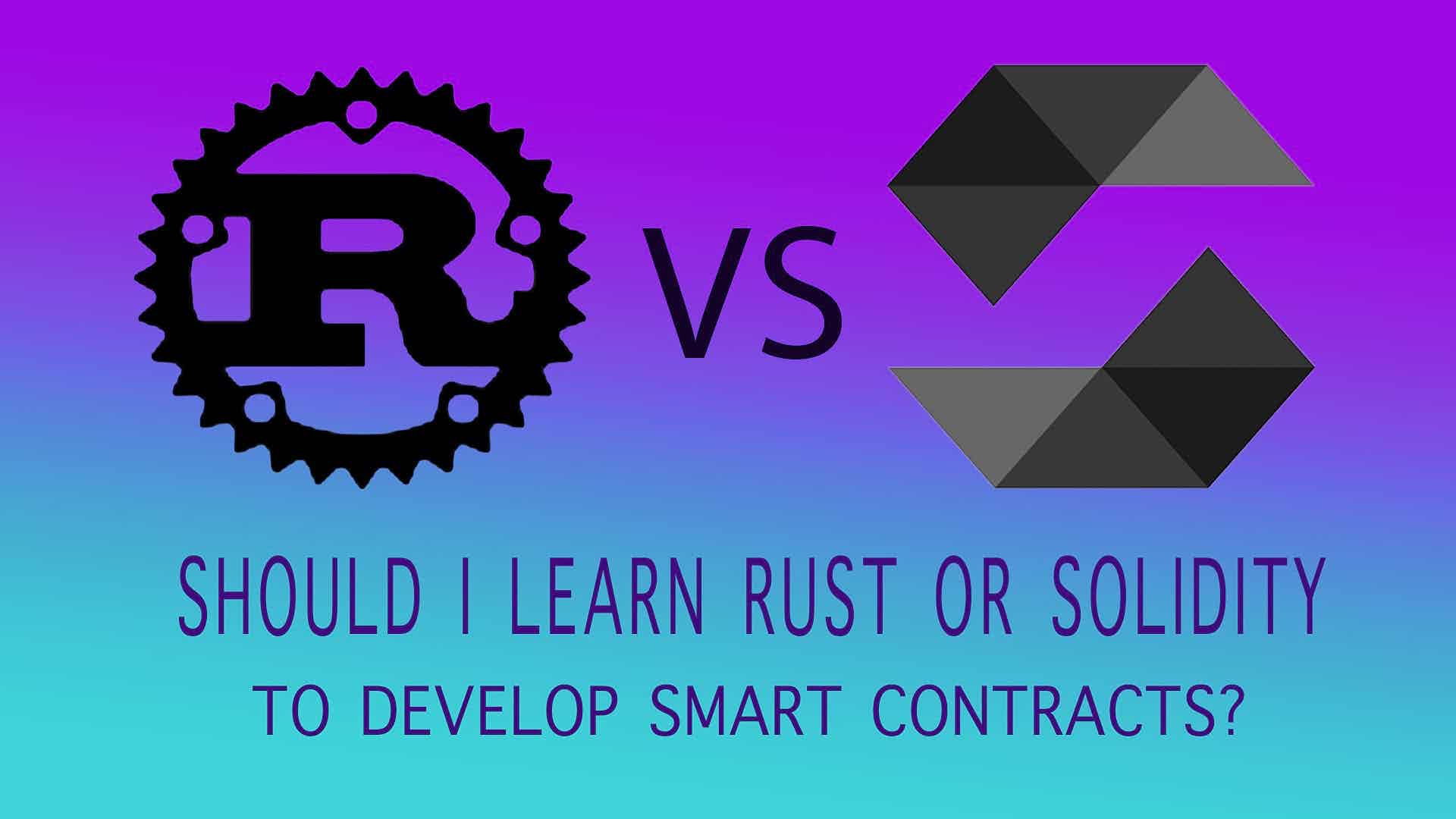 Web3 and blockchain technology are going to the moon. At the heart of this technological revolution is the smart contract. Programming smart contracts is not done in the same way and with the same technologies that we code traditional apps and websites.

You can compare each programming language according to its transferable skills, madurity, learning curve, target blockchain size, tooling and prospect salaries.

The motivations to learn a programming language vary from person to person.

If you are interested in Web3 you may not escape Rust or Solidity.

With no more ado, let's get into some details.

This aspect is related to the range of blockchains (protocols), platforms, tech stacks, domains and industries supported by the language.

Both Rust and Solidity are used to program smart contracts, but for Solidity it is its only use.

The smart contracts written by Solidity are intended to run on Ethereum Virtual Machine (EVM). Examples of blockchains that use Solidity are Ethereum, Avalanche, Polygon, Binance Smart Chain (BSC), Monax, Hyperledger and Burrow.

Rust is used to code many type of systems:

Some general concepts about blockchain functioning and programming may be transferred, but Solana and Ethereum have different approaches about how to implement the smart contracts or programs, manage memory, security, etc. So there is some effort to put when transitioning from one network to the other.

Also it is possible to look for bridges that make possible interoperability between Solana and Ethereum.

Assuming that the choosing of the platform (blockchain) was the first step, then select a language that supports coding smart contracts that will run on that protocol.

For Solana and Polkadot you have Rust.

For protocols compatible with the Ethereum Virtual Machine (EVM) you have Solidity.

Otherwise the priority changes from the language in itself to identify the platform that best supports your use cases by comparing attributes like ecosystem size, transaction speed, fees, number of validators, built in security, liquidity pool, L2, etc.

Diving into a new language could be intimidating even for some curated programmers. For beginners it could be a headache to just get your environment running. The complexity of the blockchain technology and the size of the ecosystem increases the learning curve.

Having a coding partner, community support or quality resources to reach out when stuck could make or break your coding journey.

Start slow, with small projects for continuous feedback and self-rewarding goals but challenging enough to keep your interest alive. Increase complexity gradually, check the basis and deep dive when needed. Reevaluate what works for you and adjust accordingly. Learn by doing.

I consider that the learning curve is related to your previous programming experience: programming languages, paradigms or architecture exposure.

To simplify, the learning gets reduced to acquiring the language’s syntax, constructs and mental models.

Rust is associated with a steep learning curve and to be a very complicated language for getting started in Web3, in some way attributed to its mechanisms for increasing safety and performance, and because you are in charge of managing the lifetime of the variables.

Solidity is considered to have an easier entry point given it similitud to JavaScript.

In any case it is recommended to start by acquiring the fundamentals of blockchain technology and Web3. I have made a selection of resources to learn blockchain fundamentals that includes materials from MIT, Berkeley, a16z, and Web3 Foundation.

You may feel more at ease with Rust if you have been exposed to high-level and typed languages before. Rust supports structured, generic, imperative, concurrent and functional programming paradigms. It has been influenced by C++, C#, Ruby, Swift, Haskell, Scheme, etc., and is syntactically similar to C++.

Browse to the Rust website to find learning materials.

If your background is in web programming with ECMAScript (JavaScript) then you may feel more familiar with Solidity. Solidity has influence from JavaScript, C++, Eiffel and Python. Supports object-oriented programming with inheritance, and has static typing and variadic return types. Still you will need to adjust to the low-level mindset of Solidity, you will be operating directly on bits of a variable more often.

In the Solidity website you can find good resources to start your journey.

Rust has first-class editor support in many IDE and editors like VS Code, SublimeText3, Atom, Intellij Idea, Eclipse, Vim, Emacs and Geany.

Rust uses Cargo as a build tool, useful to install packages created by the community, to test and to deploy your code, and to create documentation for your code. With Rustfmt you get automatically formatted code, and coherence across the team. Clippy helps juniors and experienced developers write idiomatic code and enforce standards.

Rust also has an online playground ready for you to start your coding journey.

You can use Solidity in several editors and IDEs.

Solidity has plugins for Atom, Emacs, Intellij, Sublime, Vim and VS Code.

Solidity has an IDE called Remix with a web and a desktop version. It is open source, used to develop smart contracts with Solidity and as a playground to learn and teach Ethereum. It is extensible through plugins. It has modules for testing, debugging and deploying smart contracts, etc.

For the Solana ecosystem you can use Anchor when coding smart contracts with Rust.

Anchor is a framework that provides a few amenities:

In the Ethereum ecosystem there are a few framework that facilitate your smart contract programming task:

Hardhat, self defined as the Ethereum development environment for professionals that will make you 10X faster, offers many features like:

Makes it easy to run Solidity locally, without dealing with live environments, when you debug, test or deploy your smart contracts. Designed as a debugging-first tool for Solidity, with stack traces, console.log and explicit error messages. Allows the customization of your tasks and environment, if you need something more specific than the default configuration. Facilitates the integration with other tools and is extensible using plugins.

The Solana tech stack includes (this could vary):

The Ethereum tech stack includes (this could vary):

More traditional roles are also needed in the Web3 space. Based on data from Web3 Jobs the average yearly salary for different Web3 positions is:

The size of the chain may inform you about stability, madurity, etc. This could be interpreted and used in many ways.

For example, the fact that Solana is smaller and younger than Ethereum is an indication that there are opportunities, services to create, tools to build. But also indicates that there are unknowns that would impact your work.

On the other hand, seeing Ethereum as a bigger and more mature chain, could indicate that there are a lot of resources, and users to work with, with an increased influence radius.

Solana with more than 50 billions transactions to date, at a rate of 1679 transactions per second, and a cost of $0.00025 per transaction offert a lot of opportunities to scale. The value of SOL is $141.99. These values are updated frequently, to get the latest info visit its official website and messari’s website.

Solana has a total value locked of $9,8 billions according to the SolanaProject Index and Defi Llama, values are updated frequently. The total value locked includes the value of all the projects built around the Solana blockchain that were at over $5 million at the time of this writing. For a full list check Defi Llama Solana’s TVL ranking:

The Solana explorer also includes other projects at the top ranking:

Sometimes you have to reach for scaling layers (L2) to sidestep scalability limitations in the main chain (L1) like the speed and cost of transactions. In this scenario you may consider some tradeoffs: roll up transactions (Arbitrum), decentralization (Polygon), block size (BSC), consensus algorithm (Avalanche).

The transition from proof-of-work to proof-of-stake, as Ethereum's consensus mechanism, is expected to increase transaction speed and lower the gas fee.

Ethereum has a total value locked of $145.01 billion according to Defi Llama. These examples are projects that were at over 1 billion at the time of this writing. For a full list check Defi Llama Ethereum’s TVL ranking

If you add Avalanche (18.51 billion), Polygon (9.52 billion), Binance Smart Chain (19.54 billion), the size of the ecosystem where you can use Solidity is even bigger.

I tried to put together some information and ideas to help you make a decision.

If I have to choose, I would pick Rust. What I like about Rust is its speed, safety and how it makes it easy to find what is going wrong with the code. Also that Rust is used to code different types of systems, and it is used to code smart contracts on the Solana blockchain. The apps coded on top of Solana can benefit from its high transaction per second speed and low fees, which gives a lot of room to scale and mass adoption.

Thinking a little bit outside of the box, I would pick both, having time to spend. The exposure to a different programming environment and style is invaluable. Plus learning how things are implemented in other blockchain would add to your blockchain fundamentals.

And if you keep pushing me, I would say, “just forget Solidity and Rust”. There are high level libraries that allow you to use JavaScript to code your DeFi apps, and some blockchains use Python, Go, or a language that you already know.

The gig crypto-economy is coming to the console, phone, tablet or PC. Earn while you learn, play, create and socialize.